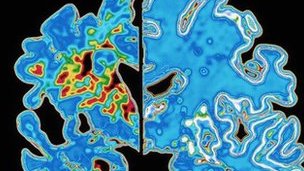 Scientists have assembled a “timeline” of the unseen progress of Alzheimer’s before symptoms appear.

A team at Washington University School of Medicine looked at families with a genetic risk of the disease.

Writing in the New England Journal of Medicine, they say signs appeared up to 25 years before the expected onset of the disease.

UK experts said the ability to detect Alzheimer’s early would give the best chance of successful treatment.

The 128 people in the study, from the UK, US and Australia, had a 50% chance of inheriting one of three mutations that are certain to cause early Alzheimer’s, which often develops in people’s 30s and 40s – much earlier than the more common form of Alzheimer’s which generally affects people in their 60s.