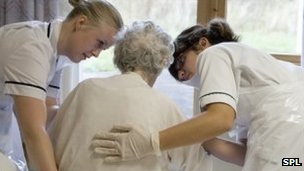 Ministers have refused to fully commit to a cap on care costs for the elderly and disabled in England, saying they need to explore cheaper options first.

They unveiled funding ideas including a higher cap or asking people to pay a fee to opt-in to the system.

A review last year proposed capping the amount people pay at £35,000 – but ministers said the current climate meant it had to look at other options.

The move has disappointed those involved in the social care system.

The announcement on funding – unveiled alongside a white paper and draft bill which sets out other changes to social care – has long been anticipated.

It asked an economist, Andrew Dilnot, to come up with recommendations and he reported back last summer recommending the £35,000 cap.