Unpaid carers being ‘let down by failing social care’ 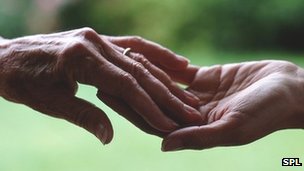 Unpaid carers being ‘let down by failing social care’

The UK’s “army of unpaid carers” is being “let down” by the failing social care system, campaigners warn.

Eight leading charities, including Age UK and Carers UK, have joined together to highlight the plight they face under the umbrella of Carers Week.

Feedback from 3,400 carers showed those providing the most intensive care often ended up with health problems themselves.

The government said there was now extra funding to allow carers’ breaks.

It is estimated that one in six carers either give up work or reduce their hours to look after elderly friends and relatives or younger adults with disabilities.

The charities said it demonstrated the hidden effect of the squeeze on council-run social care support.

The numbers of elderly and younger adults getting help from councils has fallen in recent years.

And the coalition of charities said it was the 6.4m unpaid carers who were being left to take up the strain.