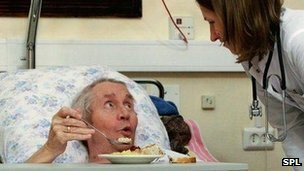 Age discrimination by NHS hospitals is to be outlawed, ministers have announced.

From October, elderly patients will have the right to sue if they have been denied care based on age alone, says Care Minister Paul Burstow.

This will not mean patients can demand any treatment they want. Care decisions will still be judged according to clinical need by doctors.

But NHS staff will have a legal duty to consider wellbeing and dignity.

The decision, which applies to hospitals in England, Wales and Scotland, follows a consultation exercise on the issue by the Home Office.

The charity Age UK said it was long overdue but good news.